The breed of dogs Greyhound also called Lebrel, constitutes a group of subraces that possess a physical anatomy very similar to each other. They are often well known throughout the world for their great racing skills, as they are tall and long dogs, which gives them more speed when running.

In their origins when these dogs were used for hunting, their aerodynamic structure allowed them to catch their prey quickly. 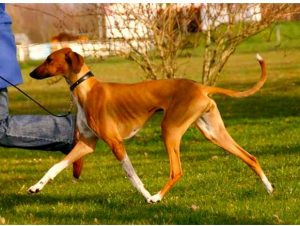 This breed is generally the result of the offspring that were selected thousands of years ago, which were as refined as the selection of offspring that is usually made today. Some Greyhound are genetically linked to primitive dogs, such as the dog of the pharaohs. It should be noted that all Greyhounds were originally from Southwest Asia.

In general, it is a race of dog quite old, that with the passage of the time has been propagating through the whole planet, which has generated the existence of diverse subspecies, all these with a single ancestor in common.

There is an incredible diversity of dogs Greyhound, from those with fine fur, long fur, even hard coat, all of which will depend directly on where they live. The most popular species of Galgos are:

* Afghan hound: It is a greyhound from Afghanistan. It emphasizes by its hair that is long, fine and smooth. He is of high stature, thin head with elongated snout (aspect very typical of the greyhounds). It is one of the types of Greyhounds that can reach more quickly.

* Spanish Greyhound: It is an autochthonous breed of the Iberian Peninsula. As they have a very high resistance capacity, they use it mainly for the hunting of rabbits and hares. However, today there are no 100% pure Spanish Greyhounds.

* English Greyhound: It is a dog of great stature, quite big and with great strength, that is singled out because it is very fast, is an exclusive species of England. It is the fastest Greyhound that exists, can reach up to a speed of 70 km / h. The English Greyhound was the first to be used for races to catch hares, in which they were betting.

1) It is the dog able to run with greater speed in all the planet, and is considered in the animal world one of the fastest generally.

2) When greyhounds run, they spend more time in the air than on ground, due to their aerodynamics.

3) They have more red blood cells compared to any other breed of dog, which is why they can receive more oxygen in their muscles allowing them to run faster.

4) The tail of the Greyhound is very useful for them, since it fulfills the function of guiding them while they run.

5) They have the ability to detect any object that is located up to a range of 800 meters away.

6) Their angle of vision is very wide, to the point that they can visualize objects that are behind themselves.

7) It is considered the most healthy dog ​​breed, as they are less likely to develop hereditary or genetic diseases.

8) Some species of Galgos sleep without the need to close their eyes.

9) Your body has the highest temperature in the canine world. 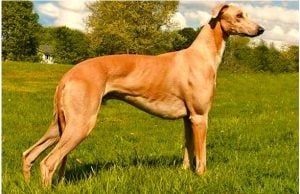 The breed of dogs Greyhound also called Lebrel, constitutes a group of subraces that possess a physical anatomy very similar to each other

10) They are very skilful to jump, the jump of greater registered height exceeds 9 meters.

11) Their blood type is universal, which enables them to donate blood to other dogs, in fact they often use them a lot for this.

12) They have a very friendly, calm, obedient personality, earning the heart of everyone who knows them.

13) The coat can have up to 18 different colors, even having a combination of more than 55 colors.

14) Gray color is currently the most unusual in Greyhounds, as a result of the past thought that gray dogs tended to be slower.

This Other Extraordinary Publication “Toast Protection Comfort and Elegance to Your Pet with Dog Collars” You may be interested Enter and check it out !!!

It should be noted that all Dogs Greyhound price were originally from Southwest Asia.

I wish you liked the publication of this article emphasizing “14 Highlights of Dogs Greyhound That You Should Know”. You can share your opinions and experience with me in the comments section.